Green roofs are those that are intentionally vegetated to some degree. This can be anything from a roof-top garden, through to grassy swards, short turf, or a scattering of mosses and lichens. . Most of these are inappropriate for black redstarts, although they will have value for other species. English Nature has published a research report that provides a review of green roofs.

The form of green roof recommended is of a particular type and follows a new Swiss model. The research in Basel has lead to modifications in the design and topography of the green roofs and informed green roofing policies at a regional level. The benefits to biodiversity of green roofs in urban situations are probably far reaching and their potential is not fully understood or realised in this country. However, two studies of invertebrates on green roofs are being undertaken in London, one funded by English Nature. The results will be included on this site when available.

The term BROWNROOF or ECOROOF is often used in conservation circles in London to refer to this particular model as they are mitigation for the loss of brownfield land. This uses a substrate material, laid down on a flat roof and allowed to colonise naturally. The research in Switzerland has demonstrated that such roofing systems can be modified to increase their positive impact on biodiversity, specifically for many of the issues associated with brownfield land. They are a significant benefit for black redstarts.


The green roofs to be used for mitigation for black redstarts should ideally:


1. Be based on aggregate mix present on the original site. In general in London and Birmingham this would necessitate the use of a mixture of crushed brick and concrete graded from 25mm to dust.

2. Be contoured from heights of at least 5cm to 15cm 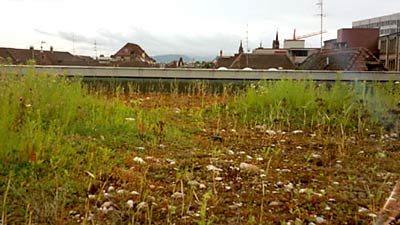 Contouring on the roof of Kantonhospital, Basel, Switzerland

3. Be allowed to colonise naturally.

4. Consist of material from the site itself and allowed to sit on site during construction. This will speed the colonisation process and also assist in the recycling of materials and reduce costs.

5. Resist the application of Sedum mats (only be used as a last resort) but if sedums are desired they should be planted into the aggregate base. 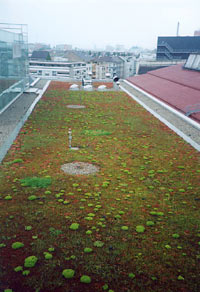 6. Application of A-frame solar panels provide a complex structure for Black Redstarts and micro-habitats for invertebrates. They are also a sustainable addition to a roof. 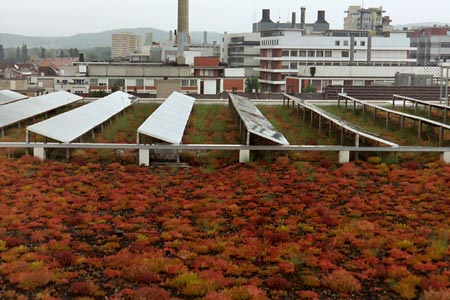