Very little has been achieved as yet within landscaping schedules on development sites. However the basic principles are to avoid the traditional ‘English landscape’ genre of trees, shrubs and grass, and particularly some of the bark-mulch-&-berberris schemes that have dominated a lot of inner urban developments.


The use of aggregates and low nutrient substrates should be the basic principle to encourage an arid, montane style of landscaping more in keeping with the black redstart’s preference for open brownfield sites.

The Black Redstart Action Plan has commissioned a landscape brief for black redstarts. This has been produced by J&L Gibbons and is viewable as a subsection within the Mitigation menu 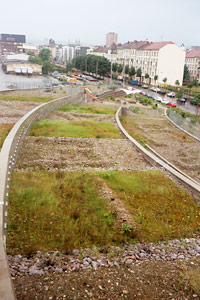 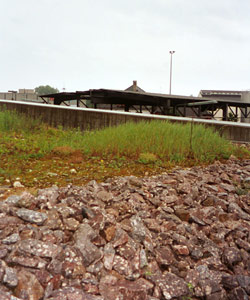 There is concern that where black redstarts are found on areas where light industrial units are planned that the costs of green/brown roofs could be prohibitive. The use of rubble landscapes as described throughout the site is an option. A new idea, only in concept stage as yet, is brown walls. Using aggregates, insulating walls are placed beside the vertical section of frames to provide insulation and sustainable drainage. The use of aggregates exposed at different heights will provide mitigation for black redstarts and other brownfield issues.

This is not a ‘new’ idea but builds on the idea of earth sheltered buildings.

In London old flood defence structures along the Thames and the Lea Valley are of particular importance for Black redstarts. The canal system seems to equally play an important part within their distribution in Birmingham and the Black Country.

The algae and flora attached to old timbers help to support large numbers of Chironomid midges [NB. the midges emerge from aquatic larvae], an important food source for the black redstart. Development sites adjacent to rivers and canals should seek to improve flood defences to ensure that, where there is no timber present, it should be installed to provide a valuable vertical habitat for the black redstart.

Old disused jetties are also important and can be enhanced by applying substrates to the horizontal surfaces. This will increase the available foraging area. There are also various instances of black redstarts nesting under jetties though this should not be encouraged. No one has yet recorded a successful brood from such nests and the likelihood of drowning when young leave nest s is a strong possibility. 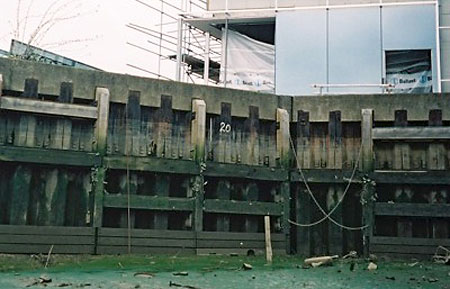